Rob Barratt was last at TwickFolk in June 2014, supporting Winter Wilson. The Bodmin-based poet and singer has appeared at many folk, literature and arts festivals all over the UK and in Australia and Ireland. Expect to hear about such profound topics as second homes, squid, distressed furniture, Jordan’s boob jobs and why he doesn’t want to swim with dolphins.

According to the Coventry Telegraph, “The Dudley-born and Bodmin-based performer has been a favourite at the last two Warwick Folk Festivals and his head is well and truly located in “Planet Barratt,” clearly a place of wonderfully bizarre inspiration.” 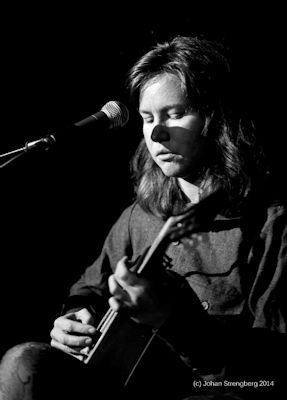 Shoutin’ Red hails from Sweden, where last July she was awarded the Junior Blues Prize at Åmål’s Blues Festival. “Shoutin’ Red was the years ”punch in the face”, damn she’ good! If you have the possibility to go and see her play you will hear how the blues sounded a long time ago. What a girl!”
Lennart Isacson, Åmål Blues Festival, Sweden, 2014

Red has been called ”the Swedish country-blues hope” and performs a mix of her own storytelling songs, old-time blues and folk ballads. With her sincere and emotional voice that echoes the sound of the old American music she’s inspired by, she has a rhythmic and playful finger-picking technique that resembles from influences like Mississippi John Hurt, Memphis Minnie and Leadbelly.

Here she is performing at Stockhol’s prestigious Fasching jazz club: