Sue and Paul are well known to TwickFolk regulars: Sue Graves takes your money at the door, and often sings a couple of songs to start the evening. Paul Vile introduces the acts, runs the sound desk and also regularly performs floor spots. Tonight they both perform full sets with their musical collaborators.

Sue Graves and Hector Gilchrist have been performing together since 2004 and have appeared regularly at folk clubs across the South of England. For ten years they were 2/3s of Soiree with Steve Poole. Now they make their TwickFolk début as a duo!

Sue has sung around the folk clubs for as long as she can remember. Her clear, expressive voice means that she has been snapped up as a singer for many a collaboration, most notably the trio Voiceover. Often referred to as the ‘Surrey Nightingale’, Sue has the knack of choosing songs that just ‘click’ with the audience, accompanying herself most tastefully with fingerstyle guitar

Hector is one of Scotland’s finest singers, equally at home with a traditional ballad, contemporary songs (with his own guitar accompaniment) or jazz crooners. In his younger days he turned down the offer of a career with a Big Band for the glamour of the dairy industry! Soon after he discovered the glamour of the Folk Scene in Crewe and has been involved with it ever since. Hector has a huge pool of songs to draw from, many in the vernacular, and his ability to evoke the essence of the Scottish tradition means that he is much in demand for Burns Nights and other ceremonial occasions. He also sings in Scottish duo Selkie, recording CDs and appearing regularly at clubs, festivals and radio shows over many years. 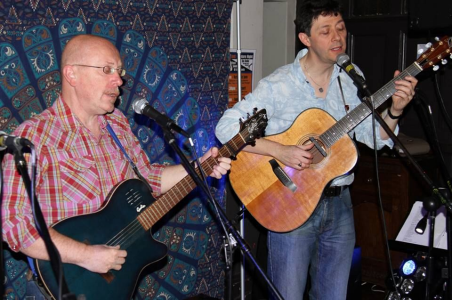 John Prosser was born in the Iron town of Tredegar and spent his formative years growing up in the valleys, in a South East Wales mining community. He is familiar to TwickFolk regulars, as his accompanist, our very own Paul Vile. John has also published a music-based novel: The Cool, Coal and Black Lightning, a gothic comedy thriller, set in the fictional mining village of Glwm in the dying months of 1962.