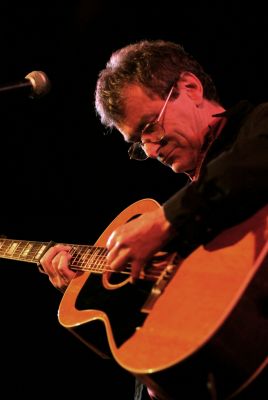 Since the 1960’s Steve has written and recorded songs such as Fire and Wine, The Rough With The Smooth and Over There in Paradise.

His debut album Stroll On was described in Mojo as: “…up there with Liege and Lief, the first Steeleye Album and Christy Moore’s Prosperous and suchlike, a masterpiece of its kind… A beautiful, rich and deeply atmospheric collection of songs, very English – like a musical impression of Dickens, Victorian Christmas cards and Thomas Hardy’s Wessex.” (Colin Harper)

The Spirit of Christmas is counted as one of “1000 Songs That Rock Your World” by author Dave Thompson, who has also written “Fire and Wine  – an Armchair Guide to Steve Ashley”

Steve’s last album Time and Tide was released in 2007 when he last appeared at TwickFolk. This year he returns with the album This Little Game, and we we are delighted to have him back.

John Prosser was born in the Iron town of Tredegar and spent his formative years growing up in the valleys, in a South East Wales mining community. He is familiar to TwickFolk regulars, as his accompanist, our very own Paul Vile.