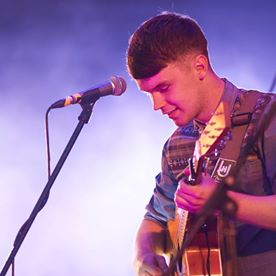 Sam Kelly is a 21-year-old singer, songwriter and multi-instrumentalist from Norfolk. Sam’s only link to folk music as a young child lay in the Gaelic folk songs that his Irish grandfather would teach him to sing. Although many individual songs and tunes have been lost in the blur of childhood memory, Sam has never lost the love and child-like awe for the beautiful sounds of traditional music. This passion pours out of him in every note he sings.

Sam’s debut EP Your Way Home was released in 2013, featuring Beth Porter (Eliza Carthy Band) on cello. This created a buzz of interest in the folk scene for Sam’s music, being described by Bright Young Folk as a “captivating introduction to a name we’ll be sure not to forget”, and gaining him support slots with Cara Dillon, Jim Moray and Kathryn Roberts & Sean Lakeman, as well as numerous folk clubs around the country.

Sam’s musical journey includes reaching the final of ITV’s Britain’s Got Talent and being selected for the first ever English Folk Dance and Song Society’s Artist Development scheme.

He is now touring with his band – Jamie Francis on banjo and Evan Carson on bodhrán:

“Sam has such a beautiful voice and sings with so much soul. I’ve seen him perform live a few times and he’s amazing…he’s so talented” Cara Dillon

“A captivating performer, Sam Kelly has one of the best young male voices in British acoustic roots music. Seriously…Check him out!” Sean Lakeman