When Rebecca Pronsky and Rich Bennett last played TwickFolk in 2013, your correspondent was still an audience member, rather than volunteer. I was so excited by Rebecca’s music that I bought all three albums, burbled excitedly at how fab she was and not long after became a volunteer. So yes, I’m bringing them back, and they have a new album: Known Objects.

The previous Only Daughter album brings to mind the Stevie Nicks album that never was, while having a distinct Brooklyn edge that Ms Nicks would never reach.

Rebecca has been singing since she was in elementary school and added songwriting to her repertoire around age 16 when she picked up the guitar for the first time. She went on to study Ethnomusicology and jazz at Brown University and came home to Brooklyn with a diploma and a demo CD. She soon met guitarist and composer Rich Bennett, who has been her musical partner and co-producer ever since. In 2015, Rebecca and Rich launched Acme Hall Studios, a recording studio and music education space in Park Slope, Brooklyn, where they both teach, record, and inspire musicians of all levels. 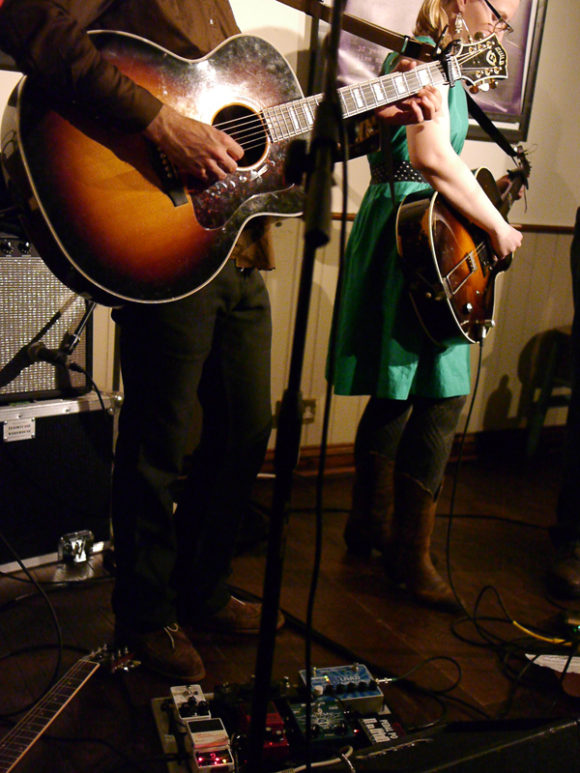 When Rebecca and Rich came to TwickFolk in 2013, someone took this photo, which ended up on her web site…
Pedals and folk music DO mix!

Rebecca has been featured on NPR’s Song of the Day, WFUV Sunday Breakfast, BBC Scotland, and BBC 6. She has twice been a regional finalist in the Mountain Stage NewSong competition and her songs have appeared on television shows such as Breaking Amish, Usta Usta, and 90210. She recently appeared singing on an episode of NPR’s “This American Life.”

Her website lists Rebecca’s favourite albums, and while Joni Mitchell gets several mentions, Stevie Nicks is not on there. Which leaves me slightly baffled, but still excited to be welcoming Rebecca and Rich back to TwickFolk.

The video at the top is from a May 2013 house concert in Bend, Oregon, posted by John Michaelson. Adrian Tyte posted this next video from two months earlier