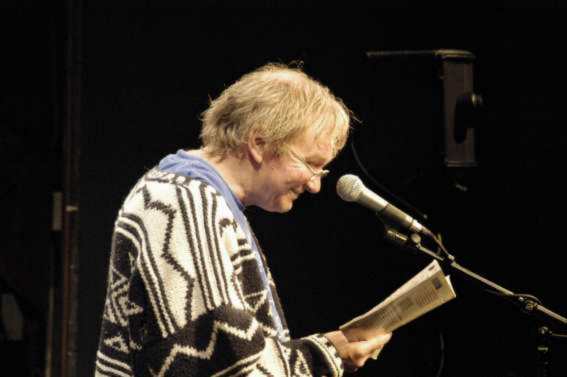 Les Barker writes strange poems and comes originally from Manchester, but he’s now Welsh. His books sell in large numbers at his gigs because people don’t quite believe what they’ve just heard. His poems have spawned folk heroes such as Jason and the Arguments, Cosmo the Fairly Accurate Knife Thrower, Captain Indecisive and Spot of the Antarctic.

Les’s solo albums include Dogologues, An Infinite Number of Occasional Tables, A Cardi and Bloke, Up the creek without a poodle, Arovertherapy and The War on Terrier. He’s travelled all over Britain, and in Hong Kong, Australia, New Zealand, and North America, and won prizes for his Welsh poetry.

There are also five highly acclaimed albums of his serious work including the folk opera The Stones of Callanish. His serious songs have also featured on albums by Martin Carthy and Dave Swarbrick, and by June Tabor. June invariably includes his serious and comic songs in her live performances. The Kingston Trio and Tom Paxton have also recorded his songs.

In the support slot is Morrigan, a four-piece a capella folk group from South London with traditional and contemporary songs, some self-penned, including seasonal wassail and mummers songs. Their close harmony singing creates a stunning sound:

…[Les Barker] may be the best writer of parodies and wordplays that the English-speaking world has ever heard.
– Tom Nelligan, Dirty Linen

There are subtleties which you didn’t notice the first time round, and there are clever puns and turns of phrase so good you look forward to hearing them again.
– Caroline Walker, fRoots

A genuine genius of comic rhyme who appeals to people of all ages with a truly entertaining family show. I have seen him reduce a whole marquee full of festival goers at Victor Harbor to a mass of helpless laughter and aching sides.
– Ron Ashton, Port Lincoln Times, Australia

…the greatest comedy talent we possess…. He’s a master at exploiting the idiosyncracies of the English language, weaving in myth and history to build bizarre stories.
– Agraman, City Life

…his jokes, having slipped the surly bonds of earthly logic, go marching on.
– Nick Beale, fRoots