Widely acknowledged as one of the UK’s best guitarists in the field of folk and acoustic music, Kevin Dempsey is also a singer, songwriter and producer. He delivers fresh and vibrant arrangements of traditional and contemporary tunes and his vocals bring both meaning and feeling to the lyrics.

Rosie and Kevin have toured in Europe, headlining their own shows. They played two shows in Austria before recording their second album, Between the Distance, in the UK and the USA in 2011. 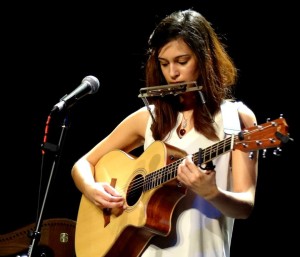 Kevin and Rosie are supported by Kelly Oliver – returning to TwickFolk after supporting Sunjay Brayne in March. A folk singer/songwriter, guitarist and harmonicist, she’s influenced mainly by acoustic music and traditional Irish folk.

Kelly is playing at TwickFolk to promote her forthcoming album, This Land. Anyone buying her EP (available tonight for £5) can have a free download ahead of the album’s release on 27 October. One track features Dave Swarbrick on fiddle. The first single from the album is  “Diamond Girl”, featuring Luke Jackson, and has already been played on Amazing Radio, prior to its release. All audience members at TwickFolk will be given a code to download the single for free!

Sue Graves, one of the resident singers at TwickFolk, says:
“Rosie Carson and Kevin Dempsey provide a beguiling transatlantic combination of youth and experience. Rosie’s haunting vocals and fiddle with Kevin’s inventive guitar accompaniments and fine harmonies are wonderful – and they have a sense of fun too! Kelly’s sweet voice and original songs impressed us all when she came to do a floor spot earlier this year, so she is an excellent choice for an opening artiste.”