North East England songwriter Jez Lowe has performed, both solo and with the Bad Pennies, at concerts and festivals in Europe, North America, Australia, New Zealand and Hong Kong. 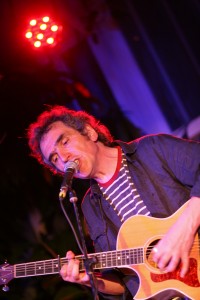 His songs have been recorded by Fairport Convention, The Unthanks, The Dubliners,  Liam Clancy, Bob Fox and many other musicians.

In 2008, Jez was nominated as Folk Singer of the Year in the BBC Folk Awards, following the success of Jack Commons’ Anthem (2007). His CD Wotcheor! (2010) surpassed that success,  becoming his most popular album yet.

Jez has contributed songs to BBC’s award-winning The Radio Ballads, including The Ballad of the Great War, broadcast in 2014. With other special commissions like The Darwin Project and All Along The Wall, this has enabled Jez to expand his writing and performing styles.

Described by Folk London as “elegant and skilled musicians”, na-mara perform traditional songs and music from across the British Isles alongside their own songs and tunes, traditional songs from France and Quebec, and a wide variety of tunes from Asturias, Galicia, Brittany and northern France. They’ve performed their own songs about the Spanish Civil War at events commemorating the commitment of Britons who went to fight fascism in Spain in the 1930s.

Here they perform “The Bite” at Cambridge Folk Club: