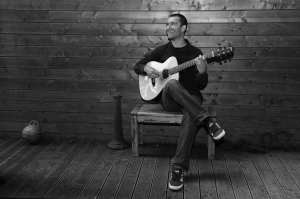 Ewan McLennan has come to be known as a guitarist at the very forefront of his generation; a troubadour, balladeer and storyteller; a singer that can move audiences with his passion and pathos; and a songwriter for whom social justice is still a burning issue.

From a BBC Horizon Award for his debut album to his recent performances on the acclaimed Transatlantic Sessions, recent years have been marked by numerous awards and accolades for his music. Ewan McLennan’s new album, ‘Stories Still Untold‘, is already attracting critical acclaim and is sure to further cement him as “one of the bright lights on the folk scene today”.

‘Ewan McLennan has realised his potential on a wonderful album of traditional folk.’ The Telegraph

‘McLennan continues his evolution into a major figure on the folk scene…an artist whose music lives and breathes.’ Songlines

‘In many ways Ewan McLennan is the perfect embodiment of modern folk song. An outstanding guitarist, a magnificent interpreter of traditional song and an immensely gifted songwriter.’ Spiral Earth

From 2011, here’s a Cambridge Folk Festival performance:
More recently, from a house concert in 2013:

Ruby Delby came to a TwickFolk Singaround in 2014 and instantly impressed us with her voice and song-writing. She’s also a poet, journalist, and one time Balearic dancer. Having performed a number of floor spots, tonight she’ll perform a full support set for the first time at the club. For some songs Ruby will be joined by fellow Scarlet Kite member Nina Mac.

Here’s a couple of Ruby’s recent performances on the TwickFolk stage: