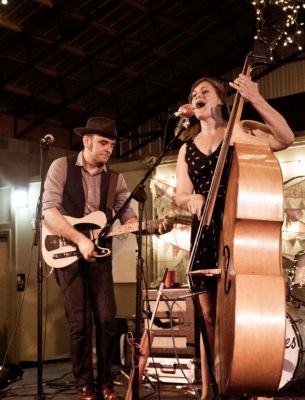 With stand-up bass and Fender Telecaster, the duo play country music with a modern sensibility.

After touring and releasing two albums under their own names, they changed their name and have released a third, less acoustic album, recorded live in the studio. Doug: “This time, it feels like we finally made a record that captures the sound we’ve been hearing in our heads for the past 10 years.”

Their first album as Wild Ponies – Things That Used to Shine – provokes comparisons with Lucinda Williams, and like Lucinda, Telisha writes from personal experience; Wild Ponies’ songs are about  “loss, rejection, abuse or starting over. It’s about trying to find places where people don’t necessarily have a voice, or don’t know how to speak out on their own, and we try to give them some sort of a voice.”

In 2015, they released a pro-marriage equality song – Love is Not a Sin. A second album is in the works, so expect to hear new songs at TwickFolk.

Canada’s Amelia Curran might remind you of Suzanne Vega in her voice and delivery, but her song writing is all her own. She received her first Juno Award for Hunter, Hunter in April 2010. They Promised You Mercy is her newest Juno nominated collection of songs: a poised, focused and consummate work.