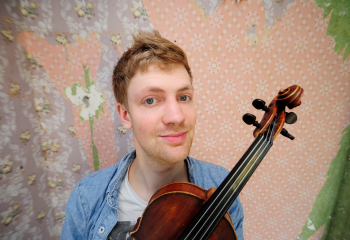 James Findlay comes from a family of folk singers and his enthusiasm lies firmly within the English tradition.  He is particularly passionate about songs from his home counties of Dorset, Somerset and Devon.   He couples this with an extensive repertoire and love for song that shows through his knowledge and understanding of the material.

James was winner of the BBC Young Folk Award 2010. He had a Mojo Top Ten Folk Album in 2012 with Sport & Play. His follow-up, Another Day, Another Story was nominated for ‘Best Folk Album 2013’ in the Spiral Earth Awards.

At TwickFolk, expect to hear songs from James’ upcoming album The Where and The When.

Here’s James performing at the Bromyard Folk Festival in 2010:

“Bloody hell, what a voice! … He’s warmly charismatic with that sparkle of personality that draws a crowd along with him.” Jon Boden

“James Findlay, still in his early 20s, is one of the very best. Only the most cantankerous curmudgeons could be unimpressed by the maturity of his singing and playing, his boldness in tackling the big ballads, and his respect for provenance.” The Living Tradition