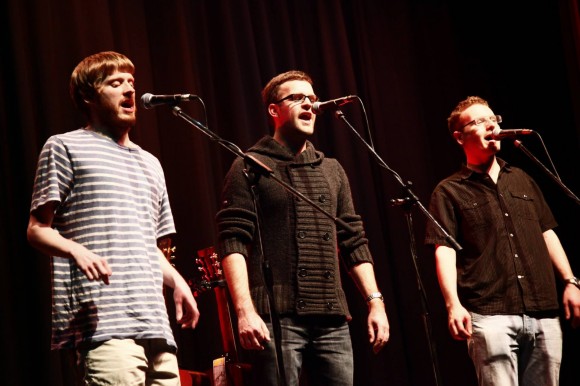 The Young’uns, one of England’s most sought after live acts, have a reputation for a cappella harmonies, but Sean Cooney, Michael Hughes and David Eagle also beguile audiences with their humour, bold vocals, storylines and musicality.

Their music is rooted in Teesside, where they started singing together at their local folk club 10 years ago, although their 2012 album, When Our Grandfathers Said No, includes a French song, “Pique la Baleine”, an unaccompanied arrangement of James Taylor’s “You Can Close Your Eyes”, instrumentals and shanties. “When Our Grandfathers Said No” is a line from one of Sean Cooney’s original songs, “The Battle of Stockton”, when, in 1933, Oswald Mosley’s Blackshirts targeted deprived areas as potential fascist hotbeds and marched over the Tees – to be physically repelled by 2,000 outraged Stockton townsfolk.

Never Forget, their third album, was released in March 2014. In 2013, Muslims from a tiny mosque in York met English Defence League protestors with a pot of tea and invited them inside. This inspired the album, whose tracks take us from this York mosque to the Spanish Civil War through stories of working-class heroes, lost sailors and abandoned lovers.

Here’s The Young’uns singing “Sit Down”:

“Robust beauty…an evocative love letter to the North East. In Cooney, The Young’uns clearly have a songwriter of considerable talent”
Songlines magazine