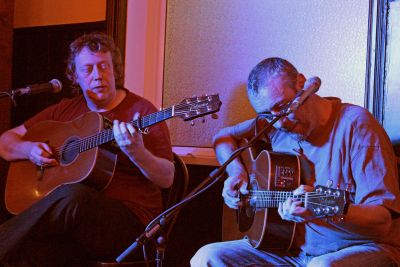 The FOS Brothers are Dave and Sam McCrory from East Belfast, N.Ireland, now based in Dorset. Together they create a unique soundscape of acoustic music heavily influenced by their Irish roots. They have been performing for over 15 years at Festivals, Arts Centres….. all sorts of venues in the UK and abroad.

Sam McRory inhabits the dark streets and landscapes of the brothers’ traditional songs, while Dave’s songwriting is no-nonsense social and emotional commentry.

Their choice of cover versions is eclectic. TwickFolk’s John Hocking first encountered them at Glastonbury Festival, drawn to their folk re-working of Frank Zappa’s The Torture Never Stops. They became a fixed part of his annual Glastonbury schedule, and the CD “Without Reason” is a favourite in the household.

“The FOS brothers have played on our stage at Glastonbury every year for the last 10 years and still pack the house with their superb musicianship and sublime vocals.” Andy Hope, Croissant Neuf, Glastonbury Festival

Here they are at Stainsby Festival in 2008:

And last year at The Dolphin Inn in Wellington, Somerset: