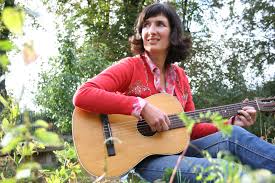 Singer-songwriter Rebecca Hollweg grew up in London and Somerset. She lives in London with her husband, bassist Andy Hamill, and their 10-year-old daughter Ruby. Andy has produced her two critically acclaimed albums – June Babies (2001) and Orange Roses (2008) and also her forthcoming third album, due for release in 2015.  Country Girl will feature 10 new songs including “Ruby” and “The Week”.

In 2009 and in 2010, Aled Jones highlighted Rebecca’s song “Orange Roses” on his BBC Radio 2 programme to promote Dementia Awareness Week. It received an overwhelming response from listeners, several of whom played it at family memorial services and said they felt it could have been written for them.

She has played three times at the Vamos Festival, Crete, sharing the bill with two former members of the Korgis, Stuart Gordon and Phil Harrison, and with poet Roger McGough.

In 2010 she also published a children’s story, “The ball that got stuck in the tree“.

In 2011 she played Moseley Folk Festival in Birmingham at the recommendation of BBC Radio 2 DJ Janice Long, who introduced her set.

She has appeared as regular guest of poet John Hegley at his monthly London night session, and has sung on several tracks for the new album from Tony Penultimate, aka Peter Brooke Turner of The Ukulele Orchestra of Great Britain.

‘Akin to an old Brill Building songsmith, Carole King couldn’t have come up with a better pop song’ – UNCUT ****