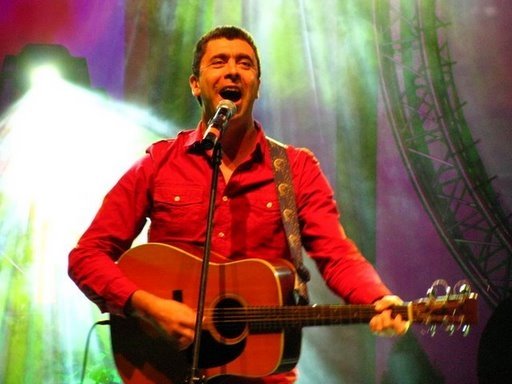 Pete Morton is a songwriter, singer and ‘folk rapper’ with a wealth of great songs and stage presence. His shows are dynamic and intense, while remaining approachable and fun loving. With well known songs such as ‘Another Train’, ‘The Shepherds Song’, and ‘When we sing together’, he constantly tours, either solo, performing his own material or his one man theatre show, ‘The Millers Tale with the songs of Bob Dylan‘. He is also part of an annual December Christmas show with Maggie Boyle and Chris Parkinson. His ‘Frapping’ (folk rap) technique of marrying traditional folk choruses with rap have been well received and was showcased on his 2014 album ‘The Frappin and Ramblin’ Pete Morton’

Pete released his most recent album in 2015. According to Tim Carroll of Folkwords reviews: “The Land of Time is intensely absorbing and thought provoking. Its sincerity is touchable. Its candour at times disconcerting. It is also another classic example of Pete Morton’s talent.”

Starting out as a busker on the streets of Europe, he has entertained all over the globe with his unique and involving style of song-writing and singing. Pete sings from the heart, delivering songs that tell compelling stories and speak of the human condition from a very unique perspective. With a passionate, strong voice and strident guitar style, traditional songs often rub shoulders with Pete’s current writing with remarkable ease. His songs are an unruly mix of humour, politics, love and social comment, wrapping their way around the folk tradition.

Pete has recorded eight solo albums of original material and a project album of traditional songs entitled ‘Trespass’. Also two albums as ‘Urban Folk’ with Roger Wilson and Simon Edwards, an album of traditional and contemporary songs with Jo Freya, and a collection of his most requested songs ‘Napoleon Jukebox‘.

Here’s a couple of songs from Pete, firstly visiting our friends at The Ram Club in Thames Ditton:
And from the Maggie Boyle Kitchen Sessions: