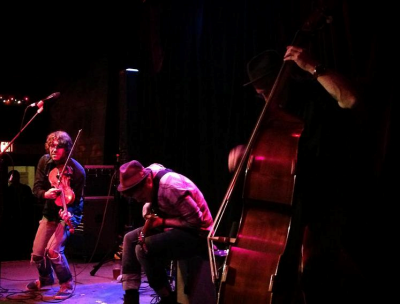 Marty O’Reilly and the Old Soul Orchestra hail from Santa Cruz, California. In addition to O’Reilly on the electrified Resonator guitar and vocals, the band features Chris Lynch on the Fiddle, Jeff Kissell on upright bass, and Matt Goff joining in on the drums.

This three-man orchestra seamlessly weaves trance based blues music, hearkening back to John Lee Hooker and Howlin’ Wolf, with a drunken minor swing comparable to some of Tom Waits’ darker works.

Within the few years since this project started, the band is already touring nationally, internationally, and selling out venues along the West Coast and throughout the United Kingdom.

“A band true to its name: soulful” -NPR

“raw musical excellence… guitar, fiddle and double bass played to within an inch of their inanimate lives.” -4000milestonashville

Matt Owens is a British singer-songwriter and musician, who came to our attention as Urby Whale in Twickenham band “Noah and The Whale”. Now, he visits TwickFolk as himself, with the album “Songs for an Empty Room”.

Matt recorded four albums with Noah and the Whale that have collectively sold over a million copies in the U.K. Having toured the world constantly since 2006 (with both bands and solo) he’s played festivals such as Austin City Limits, Fuji Rock and Glastonbury.

We don’t have a video, but follow this link to hear track from the album: https://soundcloud.com/mattowensmusic/sets/songs-for-an-empty-room