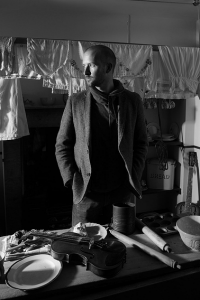 Joe Topping is a singer-songwriter who has been described as a “cross between Ry Cooder, Woody Guthrie and Paul Brady”. From the traditional music heard in the folk clubs he grew up around to the Americana and blues influences from his adventures in the USA which have included living in a pick-up truck and driving around America for the best part of a year and later walking 1400 miles with a guitar on his back from Chicago to New Orleans! Joseph has developed his own unique bottleneck guitar style which he employs in many of his original songs and has a voice that can move from velvet soft to steely and powerful. Joe has played on stage and in the studio with many legends of the British folk scene including members of Fairport Convention, While and Matthews, Andy Irvine and most recently as stand in lead vocalist in the BBC2 award winning “Best live Act” Home Service whilst John Tams recovered from surgery. Joe also currently plays in the bands Elbow Jane and The Rainbow Chasers (with Ashley Hutchings).

Scott Poley started his professional career at the age of 13 playing blues, pop and rock music. By age 18, he was playing with top British musicians and artists. Scott discovered a passion for country music and learned to play Pedal Steel / Lap Steel / Mandolin and most recently Dobro. His unique and intoxicating style has featured on countless recordings, including albums by Cara Luft (The Wailin Jenny’s) and John “Rabbit” Bundrick (The Who / Free).

Guitarist and singer Conor Doherty joined us in October 2015 for the loudest gig of the year, with the Cute Hoors. We’ve asked him back for a night where we can hear him properly. Because he’s that good. And we didn’t get any video of him.

Conor performs hand-picked traditional and contemporary songs and tunes, newly arranged, from the European and American folk traditions. A native of Derry City but now based in London, Conor cites influences that range from Tony Rose, Dick Gaughan and Nic Jones to Crosby, Stills and Nash, and Joni Mitchell. Recorded by Chris McInnes and produced by Chris McInnes and Conor Doherty, his much excellent debut solo album ‘The Savage and The Tender‘ was released in June 2015.

Here’s Conor performing Sir Patrick Spens at The Green Note in May 2015: