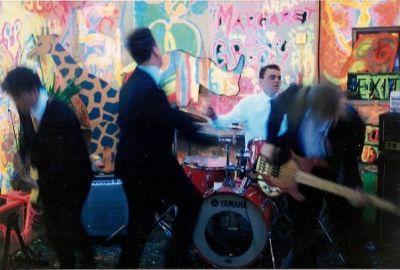 The Cute Hoors are a rootsy Rock’n’Roll band, formed originally in London in 1988. They successfully toured Britain and Europe and released 2 EPs – one of which, “Romance in A flat”, made number eleven in the Irish charts – and ‘ Gig’ a live album.

They made many TV appearances in Ireland, Britain and Europe including RTE, BBC and MTV. They played the Fleadh in Finsbury Park, Reading Festival, The Marquee, The Mean Fiddler and were regularly Time out’s gig of the fortnight – once memorably ahead of both David Byrne and Morrissey!

Their popularity was mainly due to their frenetic live shows. They disbanded in 1992 and several of the members went on to enjoy successful solo careers. This year, finding to their shock that they are all still alive and able to play, they have reformed to perform live shows and make a record.

TwickFolk will be their first ‘official’ engagement. Already word has gone out and people are booking their flights from as far away as Dublin and Edinburgh! They will perform a mixture of their new and old roots and roll songs. They want people to dance and have a good time. So no saying “sssh”.

Concert footage from 23 years ago is hard to come by, but here’s what they sound like:

Plus, an old promo video from back in the day:

Guitarist and singer Conor Doherty performs hand-picked traditional and contemporary songs and tunes, newly arranged, from the European and American folk traditions.  A native of Derry City but now based in London, Conor cites influences that range from Tony Rose, Dick Gaughan and Nic Jones to Crosby, Stills and Nash, and Joni Mitchell. Recorded by Chris McInnes and produced by Chris McInnes and Conor Doherty, his much awaited debut solo album ‘The Savage and The Tender‘ was released in June 2015.

Here’s Conor performing Sir Patrick Spens at The Green Note in May this year: