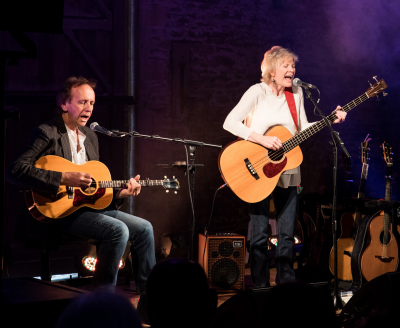 According to the TwickFolk archives, Dave Ellis & Boo Howard have played for us more often than anybody else, and we look forward to them returning with their latest album “Facebook Friend”. Their songs are intelligently constructed, elegantly articulated and never less than entertaining. The mix is eclectic (from folk to jazz to blues to bluegrass) but the songs are at the heart of it all, served by imaginative and stylish arrangements and by the singing and playing of two seasoned, wholly in tune musicians.

Dave Ellis came down from Liverpool for the London folk club scene in the 70’s. He released a solo album which some consider a classic guitar record of its time and which gave him national exposure on the Old Grey Whistle Test and In Concert. In 1979 Dave formed his electric band ‘The Reactors’ which incorporated guitar, drums and keyboards with Boo Howard playing bass and handling most of the vocals. The band was eventually trimmed down and developed into an electric duo which was renamed ‘Brave Lucy’.

In the late 90’s they unplugged and combined Dave’s intricate guitar work with Boo’s mellow vocals to create something very different and entirely new in the folk and acoustic clubs. Dave & Boo’s live act has now been honed to perfection in the folk clubs where they have developed a large faithful following in the south of England.